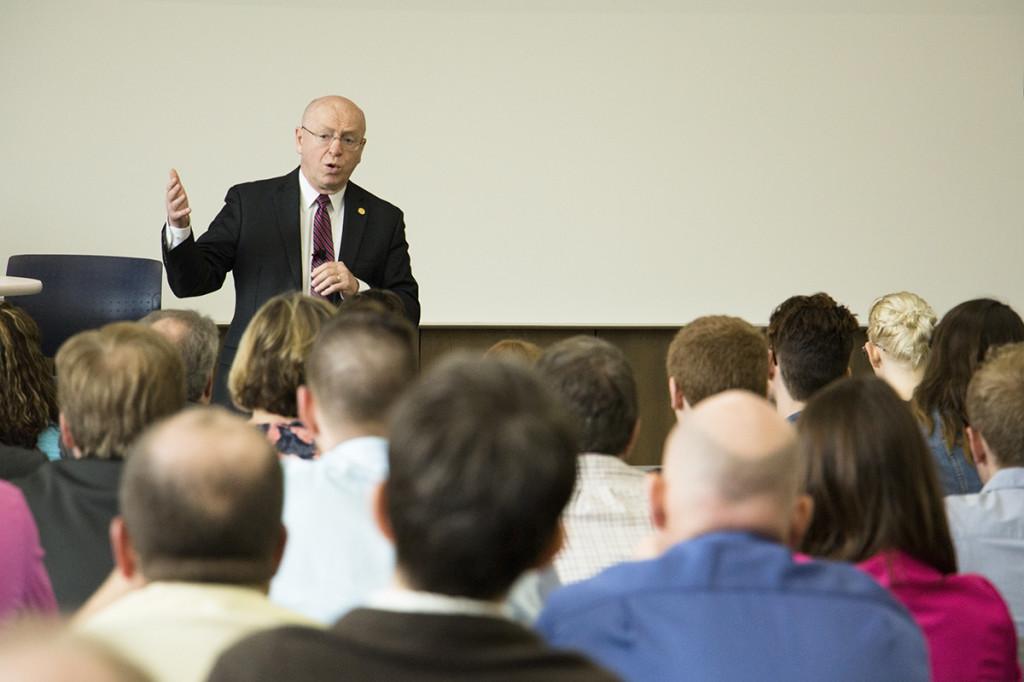 Ray Cross, UW System president, spoke about proposed budget cuts to the university system at an open forum for UW-Eau Claire faculty, staff and students Wednesday afternoon in Centennial Hall. Cross touched on challenges ahead for the UW System and his efforts lobbying state lawmakers to ease the cut.

With the proposed $300 million funding cut in the 2015-17 state budget, lawmakers — and the public — told the UW System it’s not a bedrock investment, Cross said during a question-and-answer session in Centennial Hall.

“I look at legislators as the mouthpiece of the public,” Cross said. “So the public is telling us ‘we don’t value higher education as much as you do, Ray Cross. We would like to see our resources spent elsewhere.’”

Cross said he’s lobbying lawmakers to reduce the size of the cut and highlight the System’s value to the state, while campuses System-wide prepare to shave staff and resources.

Gov. Scott Walker’s biennial budget would freeze tuition across the UW System and amount to a $7.5 million state funding cut to Eau Claire over the next two years.

Walker also froze tuition across the UW System in the 2013-15 state budget — the first two-year freeze in the UW System’s 43-year history.

Eau Claire plans to cut about 27 Full Time Equivelent faculty and staff positions to even an existing $4.5 million budget deficit by about $2.8 million, and will need to eliminate more positions to comply with state budget cuts.

Chancellor Schmidt’s separation incentive offers 50 percent of an employee’s base salary to five-year UW System veterans 55 and older in exchange for early retirement from Eau Claire.

“In the end there are going to be hard decisions,” Vaughan said. “There needs to be some rational thought.”

Cross said Wednesday that administration System-wide will need to be restructured ahead of the cuts.

“It is true that administrative functions have grown disproportionately,” Cross said

“Do you have a sense of how much the fund balances is going to be spent down in the next biennium, and do they want us to go to zero?” Jewell said.

Cross said the “fund balance fiasco” painted an unfavorable portrait of the UW System. Lawmakers expect the System to use that fund balance to even state budget cuts.

Cross said it’s unrealistic to expect the System to operate without reserves — that’s why the business community didn’t speak out after the reserve account was revealed.

“It was in our annual report but we should have been forthright,” Cross said. “We were fearful — I wasn’t part of it, neither was (Schmidt) so I can say this — that (lawmakers) were going to take it from us. And in the end they are, really.”

Cross said he favors a plan in the budget that would dub the UW System a “public authority.”

According to the proposed budget, the plan allows the UW System:

— Oversight of construction projects funded with gifts or grants

Although Cross said he’d resign if Wisconsin lawmakers tampered too much with the System’s tenure and shared governance systems, he told the crowd both could be tweaked.

Full professors, he said, should be subject to post-tenure review. That means penalties for professors that don’t research and teach to par, and pay raises for those that do.

Cross, during the forum Wednesday, ranked Wisconsin — with New York, Rhode Island and Oregon — among the “most regulated” higher education systems in the country, he said.

“Part of our argument is to free us up to be responsive, nimble and accountable,” Cross said.

Scott Lowe, an assistant professor of philosophy and religious studies, said he’s not confident in the future of the UW System. He’s taught at Eau Claire for 11 years, but he’s now looking for a job elsewhere ahead of the proposed cuts.

“I believe Mr. Cross is a smooth and accomplished communicator, which might be what we need dealing with legislators,” he said. “I have no idea if he’s telling the truth.”

“We are the foundation on which the economy of the future rests,” Cross said  “Chipping away at those pillars hurts us.”

Max Garland, Eau Claire English professor, said during the forum that college in his day was largely free.

And education was more affordable for lawmakers in power today, he said;  education cuts raise the barrier to success.

“The greatest generation, they were not rich people,” Garland said. “But they invested in America’s greatest gift to the world, not the interstate highway system, not the internet, not McDonald’s, not a man on the moon, but a free or at least affordable education. That’s what tyrants fear.”