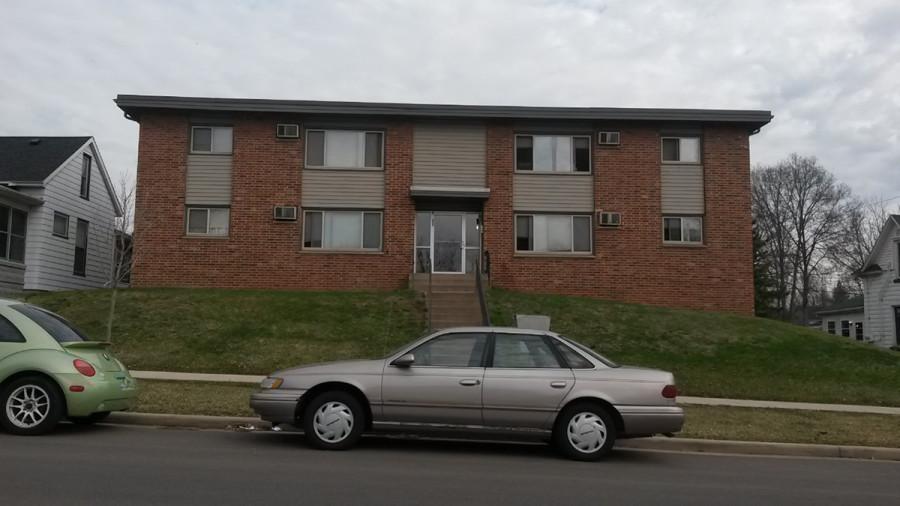 Above is the apartment building, located at 230 Niagara St. in Eau Claire, where UW-Eau Claire senior Rylan Page says he had money stolen from him in 2013. Photo by Steve Fruehauf.

Local crime statistics show a decrease in overall violations in the past six months, chiefly in student populated areas near Water Street.

According to crimemapping.com, a database where Eau Claire police chart crimes, the West Patrol District — covering Half Moon Lake and Water Street — has fluctuated around the same number until January where it has started to show the slight decline.

Police respond most often for disturbing the peace, alcohol or drug violations and burglary or larceny calls.

Lieutenant Greg Weber said he’s familiar with the student area from patrolling it for the past three years. Aside from common ordinance violations by student residents, he said younger people in the area are more likely victims in cases like theft, where money and valuables are taken.

“One of the messages that we try getting out all the time but sometimes falls on deaf ears is, get to know your neighbor, especially if you’ve got neighbors who aren’t students themselves,” Weber said. “There are some permanent fixtures in the neighborhood — and if you’re on good terms with them — they’re more apt to keep an eye on your house.”

While not in all cases, Weber said realtor agencies are notified of tenant discipline if they’re considered a nuisance to the greater neighborhood. For example, an underage drinking violation wouldn’t automatically demand agency notification, because it’s an isolated incident, and no one else was affected by it.

Office Assistant Jane Marston said Clear Water Real Estate has roughly 100-110 units in the Randall Park area. If the police notify the agency of a tenant violation, it will inform the tenant that criminal activity is a direct lease infraction. If there’s a second offense, the tenant will be evicted.

While rare, Marston said the agency mails a five-day notice of eviction after an additional offense. The tenant then receives a subpoena to appear court after Clear Water files eviction papers. There’s usually a three-week waiting period, and if the tenant fails to appear, the absence means automatic judgment.

“To actually evict them and get them out of the house, you have to serve them again and get the sheriff to go evict them,” Marston said. “It’s a long process, but a lot of times that gets slowed down, too.”

Earlier this year, somebody keyed the car of UW-Eau Claire senior Rylan Page’s roommates outside their home late one night on Menomonie Street. He said the police did a great job handling the situation.

Also, he said someone once stole money from his former home at 230 Niagara St. during a get-together. Although the cash was later returned, Page said he now locks up valuables when noone is home.

“It’s especially important during breaks because most of the time people are gone,” Page said. “So you have to make sure everything is locked up.”

Weber said police and UW-Eau Claire are discussing a house watching system. If implemented, students could register online and let the program know when they would be out of town. Volunteers would then observe the house while the tenant is gone. Universities that have implemented this system have shown a reduction in burglaries.