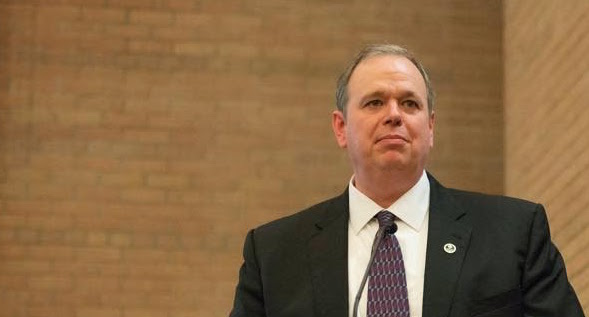 Schmidt said the proposal is the “largest cut in the history of this institution” and compounds a $4.5 million deficit the university is currently scrambling to resolve. The proposal includes a cut through the upcoming state budget coupled with a tuition freeze, but will allow the UW System more control over tuition and spending after mid-2016.

Though the specifics of Walker’s proposal will not be made public until Feb. 3, Schmidt said he will work to minimize direct effects of the cut to the university.

“The budget impact can’t be overstated,” Schmidt said. “My job is to make sure this university gets through any adversity.”

Budget changes
Schmidt said the proposed biennial budget cut will come in the form of two $150 million cuts, the first to occur on July 1. This will give the university four months to make any initial tweaks, over half of which Schmidt said have already been identified.

Eau Claire will absorb about 5 to 5.5-percent of the total UW System cut — that marks a 25 percent, or $7.5 million, cut in state funds here. Schmidt said this will be added to a current $4.5 million deficit.

Schmidt said according to Walker’s statement Monday, undergraduate tuition will be frozen for the next two years. Schmidt said the university must fight this cut as well as prepare for the inevitable increase.

“I’m not asking you all to be on the same page with me,” Schmidt said. “But as my job as leader, I’ve got to do both.”

Local autonomy
Granting Eau Claire the right to make its own decisions will save time and money on things that do not benefit the university, Schmidt said. This will give Eau Claire more flexibility when making decisions as well as the ability to “make plans on a steady base of support”.

“I need every tool in my tool case to creatively address the situation,” Schmidt said.

Schmidt said self-governance would not begin until July 2016. This would give universities time to remove themselves from reliance on state government as well as time to develop their own systems of operation.

“(It) can be done,” Schmidt said. “But it’s a matter of how do this efficiently.”

Stating the facts
Schmidt told a standing-room-only audience of faculty and staff to be open and honest with students about upcoming changes.

“It appears really bleak, and (students) may believe it’s fact, but the truth is, we don’t know all of the facts,” he said.

Despite the lack of upfront knowledge, Schmidt said it’s important to take strategic measures and act sooner rather than later.

“We have to improve while we’re going through this to maintain a competitive edge,” he said.

The ‘Eau Claire’ way
Michael Fine, political science professor, said this budget is simply a recommendation from the governor and it has not been decided on as of yet.

“It seems to me the important process that has to go on at this point in time is to try and convince the legislatures … that we can’t absorb that kind of cut at one point in time,” Fine said. “It’s a lack of appreciation of what we do.”

Fine said during times of financial hardship the university often cuts “the Eau Claire way”, substituting a direct cut by instead leaving the position of a retiring professor unfilled. Fine added this method, though doing the least amount of “human harm”, damages students’ experience due to a lack of specialization within specific departments and courses.

“Students should particularly worry about departments that are aging,” he said. “Because I would expect those departments with retirements to find replacements.”

Fine said imposing cuts and leaving universities to deal with the changes on their own is a matter of the UW system “passing the buck”.

“Because what in effect they’re saying is that, ‘we’re going to force you to make the cut, and then you can figure out how to do it,’” he said.

Looking ahead
Even with a pending budget cut, Schmidt said it’s too early to tell if Eau Claire will succeed. He said the university needs to do what is right for students and follow through with the university’s commitment to the best quality education.

“My responsibility is to make sure our students, the ones who are here now, the ones who are coming next year, and the ones that will be coming long after I’m not her “have the same excellent opportunity nearly 100 years of Blugolds have had,” he said.