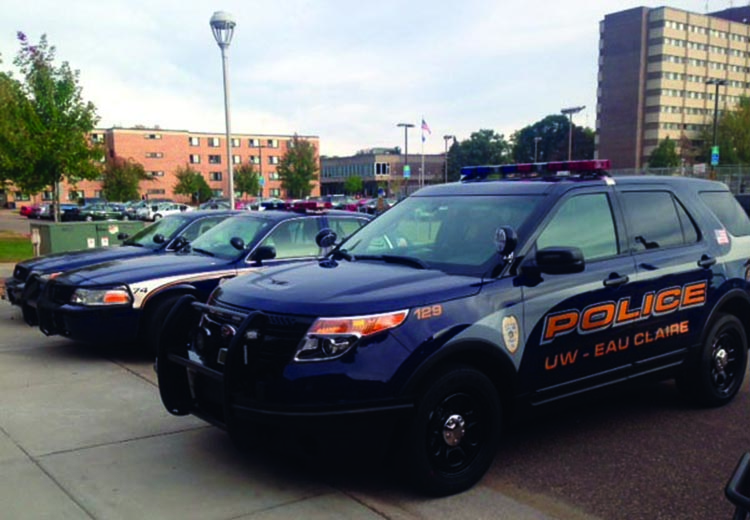 A pedestrian passing the Hibbard Hall parking lot spotted a dog left in a vehicle in below zero weather Jan. 4, according to UW-Eau Claire Police.

The responding officer determined the dog was fine, despite minus three degree weather at 10:50 a.m., according to a police report. Police contacted the owner of the vehicle.

The owner told the officers she left the dog in the car while she attended church. Authorities left without issuing any citations.

Campus Police responded to a report of an unknown man inside Bridgman Hall during a church sleepover Jan. 2.

Carrielle Cofax, Bridgman Hall director, reported a man inside the building at 8:48 p.m. while the hall hosted a church sleepover for 11 girls between the ages of 11 and 16,  according to police.

One of the girls was looking at posters near the east first floor stairwell when the man entered. She greeted him, and he did not respond. She ran back to the basement, unsure of where the man went, according to a police report.

The front entrance of Bridgman was unlocked to let the girls inside. No students were living in the building during winter break and the building was not open to the public.

She described the man as a white college-aged male with short to medium length hair, possibly wearing a T-shirt, shorts, and no shoes, according to the report.

Officers found no unauthorized persons in the building after checking all resident rooms and exterior doors.

At about 10 a.m., an officer spotted a man walking off the footbridge, headed toward Schofield. The subject froze when he spotted the officer, and continued to stare as the officer passed.

When police responded an hour later, the man was staring straight ahead motionless.

When asked if he was alright, the subject answered yes and explained that he was just out for a walk. He said he was not in need of any assistance. The officer then left the scene.

UW-Eau Claire police responded to a report of a homeless man sitting in the lobby of the Eau Claire School of Nursing Jan. 3.

Debra Jansen, associate dean of Eau Claire’s College of Nursing and Health Sciences, found the building unlocked and noticed the man and a “foul smell” upon entering, according to a campus police report.

The man explained the entrance was unlocked and he had nowhere else to go. Jansen asked him to leave and called the police from her office. According to police, the man was gone when she returned.

Jansen told a responding officer that custodians could have left the building unlocked over the weekend, which was an ongoing problem.

The officer secured the building and Phillips Hall, which was also left unlocked over the weekend.