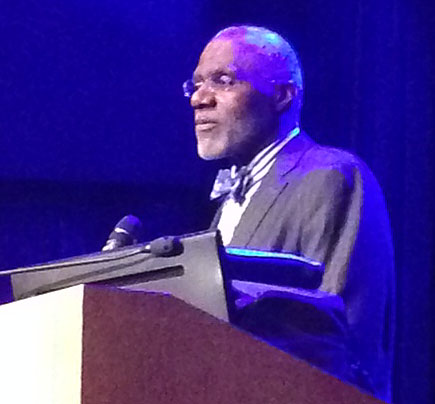 The first African-American Supreme justice in Minnesota, Alan Page, spoke this Wednesday in Schofield Auditorium about the importance of mentoring and being good role models for children. - Photo by Ellis Williams

Throughout his football playing days, Alan Page rarely sat on a bench. He was a standout athlete at every level of competition – resulting in an induction to the National Football League Hall of Fame in 1988.

Four years later, Page was named a Minnesota Supreme Court Justice, and for the next 16 years, the former Minnesota Vikings defensive lineman’s home became a bench.

On Wednesday, the first African-American Supreme Court Justice in Minnesota rose from his bench to deliver a speech in Schofield Auditorium as part of the The Forum Series, which is in its 73rd year of existence, at UW-Eau Claire.

The tall and burly yet soft-spoken Page stood among the crowd and stressed the importance of guiding youth and presenting them with the opportunity to learn.

“I believe children are the future, and that future is mostly about hope,” he said. “If we are to make the future better and brighter, then we must prepare children, for they will be tomorrow’s leaders.”

His speech, titled “Mentoring and Role Models: Two Things Students Cannot Live Without,” was filled with anecdotes that detailed how the 1971 NFL MVP developed his passion for aiding the less fortunate.

Page recalled a story from his final year with the Vikings when his coaching staff told him and his fellow defensive lineman to read their playbooks aloud to each other during their team meetings.

There were nine men in Page’s group; five of them could not read. In that moment, he realized that far before his young teammates strapped on a helmet someone had failed them in their education.

“In that conflict, coupled with my parents emphasis on education, I developed a passion for ensuring educational opportunities,” Page said.

In 1988, Page was inducted into the NFL Hall of Fame, and in the same year he used his celebrity to launch the Page Education Foundation, officially realizing his dream of helping youth grow in the classroom.The Page Foundation rewards up to $2,000 a year to non-white students throughout Minnesota who hope to achieve a higher education. Over the foundation’s 27 year history, they have had more than 6,000 Page Scholars.

Page said the most important aspect of being a Page Scholar is the mentoring recipients are required to be given to children from kindergarten to eighth grade, and through their work, they have greatly magnified Page’s influence on Minnesotan youth.

“The process of educating people and setting them on a good path is easier done in the formative years when learning is easy and natural,” Dennis said. “That’s the essence of what Justice Page delivered in his speech.”

Along with the importance of educating the youth, equally important was Page’s belief in the power of hope. Eau Claire resident Dennis Pearson said the number of times the Minnesota Supreme Court justice used the word “hope” stood out to him.

“I think a lot of people are feeling pretty dismal these days,” Pearson said. “He believes education is what provides hope in the future.”

To conclude, Page challenged audience members to put their hearts, bodies and minds to the task of becoming role models and mentors in hopes of ensuring educational opportunities for all.