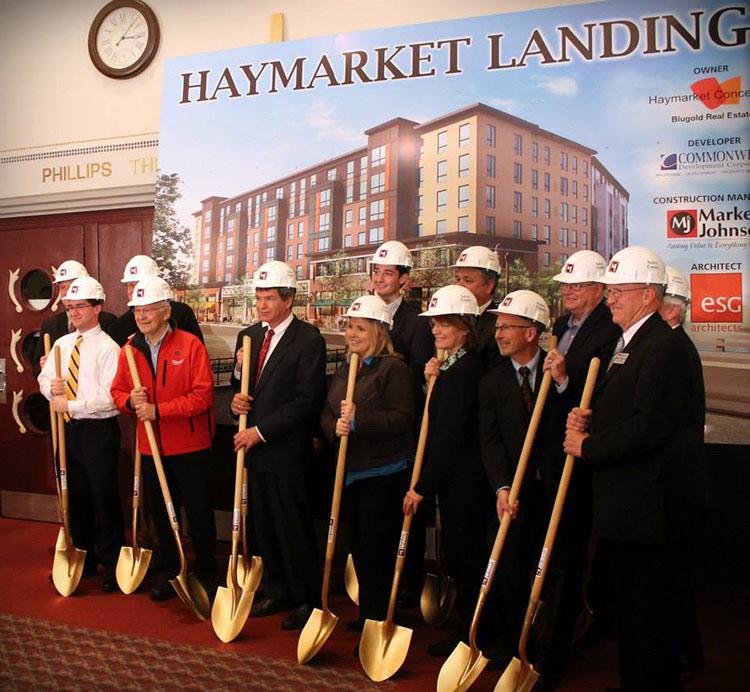 Several people involved with the Confluence Project pose for a photo during the Groundbreaking Shovel Ceremony in the State Theatre. The Haymarket Groundbreaking Ceremony marked the start of construction on the mixed use Haymarket Landing building downtown. - Submitted Photo

The Confluence Project hit a major milestone early Tuesday afternoon with the Haymarket Landing Groundbreaking ceremony at the State Theatre.

The ceremony commemorated the construction that will begin on the Haymarket Landing complex, a building that will be used to house students and retailers on Barstow Street.

“It is a great time to be part of Eau Claire history,” Kerry Kincaid, president of the Eau Claire City Council said.

Kincaid was one of 10 different people associated with the Confluence Project who spoke at the event, including UW-Eau Claire Chancellor James C. Schmidt.

Chancellor Schmidt said the university has been housing students in hotels for years and will be able to make great use of the downtown housing project. Schmidt also said a project like this will only make the university more attractive to prospective students.

“It’s about competitiveness,” Schmidt said. “We are not a business but business principles do apply to the university.”

The event was originally scheduled to be held on the project site. However, winter weather caused the event to be moved to the lobby of the State Theatre a block away.

Mike Rindo, assistant chancellor for facilities and university relations, said the university assessed student needs and included the need for a building like Haymarket Landing in their master plan.

“Our 20-year master plan demonstrated that students wanted this,” Rindo said. “Something like Chancellors (Hall), only off campus.”

Paul Kohler, Eau Claire chamber of commerce board chair, said he could not think of a better way to support the Chamber of Commerce’s mission of advocating for Eau Claire businesses than the Confluence Project.

Sam Fish, student body president, attended the ceremony and took part in the Groundbreaking Shovel Ceremony. He said the progress the university and community are making is exceptional, and it will be rewarding to see students helping to revitalize downtown.

“(The Confluence Project) speaks to how interested our community is in our university,” Fish said.

The Confluence Project was first proposed in May of 2012 and has had to stand up to a county wide referendum last spring. City Council gave the Haymarket Landing building final approval on Oct. 14.

The Chair of the Eau Claire County Board of Supervisors Gregg Moore may have delivered the most sentimental words of the afternoon during his speech.

The building is expected to be finished by June of 2016 and is named to honor the historic site as a place for public gatherings and commerce.