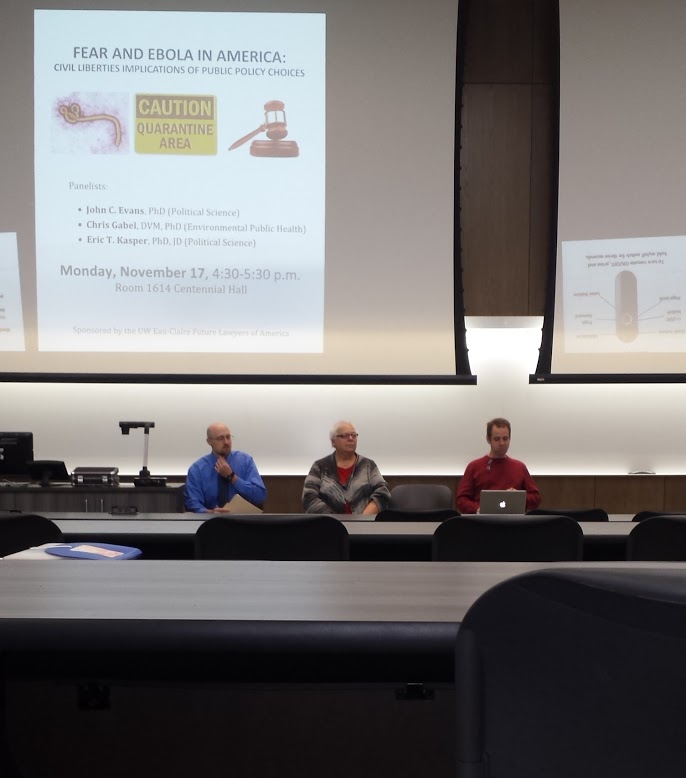 The definition of the word quarantine, is sheltering someone not yet with disease but someone we suspect that might be carrying a disease said Chris Gabel, clinical assistant professor in environmental and public health at UW-Eau Claire

The word quarantine was thrown around multiple times by Gabel, and political science professors John Evans and Eric Kasper, as they informed a quiet lecture hall filled with 25 people on the fear Ebola brings Americans.

Before the speakers went too far into the topic Gabel explained to the crowd what the Ebola Virus really is.

“Ebola is a virus, meaning it doesn’t have antibiotics but it is enveloped which means we can clean it up,” she said. “The virus is presumed to come from bats and primates in tropical Africa who come in contact with humans.”

Kasper brought up a story involving Kaci Hickox, a nurse from Maine who recently was presumed to be carrying the Ebola virus after returning home from Sierra Leone where she was treating patients.

Hickox, he said, was forcefully quarantined in a tented area in New Jersey for 21 days but was let off after she showed no symptoms after 24 hours. Hickox later threatened to sue the state of Maine for the actions.

“Diseases are seen as a danger to society similar to how terrorism is seen,” Kasper said. “Although due process limits decision making, state and federal governments fear and try shutting down anyone believed to have a dangerous disease today by quarantining.”

Senior Aaron Emmert had similar views as the speakers on Ebola and it being blown out of proportion due to fear and the media.

“It’s important for us to not rely on speculation when it comes to the virus,” he said. “Our generation hasn’t lived through something like this which is why we we fear it and blow it out of proportion.”

Although Ebola is a fairly young virus when it comes to involvement in the United States, Evans said that he can’t find a time while looking through cases involving Ebola or other dangerous illnesses, that a state government was not granted the right to quarantine an individual.

“Something that people don’t understand is how few of people have died from Ebola in the states today,” Evans said. “The flu kills thousands every year, as compared to the Ebola virus that will kill only will 1-3 people per year.”