A few days in Eau Claire offers opportunities for families 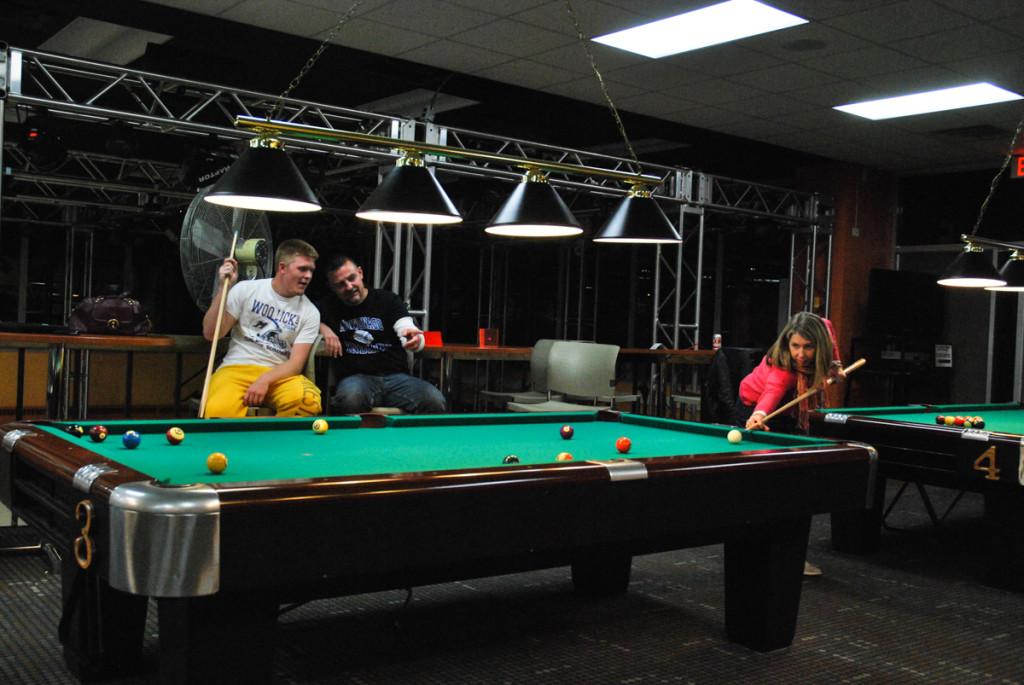 Freshman Mitchell Geisler sits with his father, Kevin as they watch his mother, Sandy line up a shot.

A planetarium show, team trivia, a picnic and even a professional juggling and comedy show.

All were part of UW-Eau Claire’s annual parent’s weekend on Saturday and Sunday on campus that gave families the opportunity to spend a weekend with their student.

Student Programs Coordinator Katherine Braunsky, who is in her first year at the position, said this year’s turnout showed impressive numbers the campus hasn’t seen in awhile.

“Despite this being my first time planning this weekend, I think it went extremely well,” Braunsky said. “Exactly 330 families signed up for the programs, while many other families visited but didn’t participate in the events on campus.”

The fun for the weekend all began Friday afternoon when the families arrived to campus.

The Bowling and Billiards Center offered discounted glow bowling until midnight and the University Activities Commission  sponsored a late night bonfire with s’mores and hot dogs behind Sutherland Hall all while the weekend’s campus film “Up” played in Woodland Theater.

However, the fun didn’t end there. On Saturday L.E. Phillips Science Hall held a planetarium show for families, the Blugolds took on UW-Whitewater in football at Carson Park, Davies Center hosted a picnic with barbeque, lasagna and many desserts and comedy juggler Alex Clark entertained families in Zorn Arena during the night cap.

As the weekend wound down on Sunday, students and their families were invited to a brunch in Davies Center. At this brunch, multiple campus administrators and faculty attended and mingled with families. Vice Chancellor Beth Hellwig, Student Senator of Academic Affairs Abby Kielman and RHA President Liz Wussow all spoke with families about the university and its current and future plans.

Although many of the events throughout the weekend attracted many families, Braunsky said the athletic events also made parent’s weekend fun for parents and students.

“Having a home football game on parent’s weekend is very important,” Braunsky said. “It allows the families that registered for the weekend, and the ones that didn’t, the opportunity to spend time together in an exciting venue.”

Although the football game ended in a blowout against the No. 1 ranked Warhawks, the off-campus atmosphere around Eau Claire gave families more opportunities for fun.

Freshman Chris Atwood said his family didn’t participate in all the events on campus over the weekend, but instead they explored some areas off campus.

“It was nice for someone like me without a car and not from the area to get to travel off campus and explore with my family,” Atwood said. “Although the campus events seemed interesting, my family visited a park in Chippewa, and I was able to see more of the city.”

Braunsky said parents look for a reason to visit their student on campus without imposing, and an event like parent’s weekend gives them just the opportunity to do that.

Despite the success of the weekend, she said the university is continuing to improve it, and a possible name change to “family weekend” may be in the future.

“We are in the talks of possibly changing the name of the weekend to better answer questions we have received this year,” Braunsky said. “We want to let folks know we are encompassing the whole family in the weekend, not just parents.”

Plans are already being talked about for next year’s parents weekend, but next on the list for Braunsky and her team is Lil’ Sibs weekend, which is scheduled for April 17-19 and allows students’ younger siblings the opportunity to see life on a college campus.