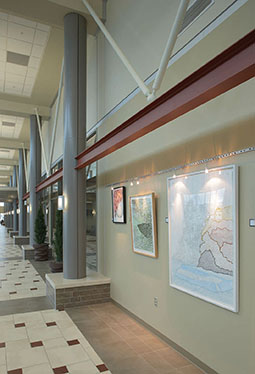 Flying from Eau Claire to Chicago doesn’t necessarily mean getting on a large, commercial airport, which is what Charity Speich, the airport manager of the Chippewa Valley Regional Airport, said she hopes community members will realize with the help of some new funding for marketing.

The airport recently received a $150,000 grant from the U.S. Department of Transportation Small Community Air Service Development Program, which Speich said will go toward a plan to develop a strategic marketing plan.

“People choose to travel from another airport for a variety of reasons, but what we don’t want is one of them to be just lack of knowledge,” she said.

Speich said she hopes the marketing will bring awareness of the airport to more community members, especially college students who may not know there is an airport in the area. CVRA is located on Starr Avenue in Chippewa County.

While she recognized that choosing CVRA may not always be the best option for a trip, she said she believes it’s important for community members to know it is one option.

Compared to large airports, she said there are many benefits of choosing smaller general aviation airports such as CVRA.

“The cost of parking is much less from your local airport,” she said. “It takes less time to get through security and there’s just more availability of people to answer questions if you’ve never traveled before or you’re not exactly sure about how to follow procedures.”

Megan Overstreet, a senior at UW-Eau Claire, grew up with a father who flew general aviation airplanes, and she said she really appreciates the local airports and the opportunities they have to offer.

“They’re really friendly and small. There really isn’t much security, but there’s a lot of trust built up,” she said. “It’s really fun to just go and hang out at airports and talk to the pilots and watch them take off.”

While she has never used CVRA, Overstreet, who is from the Milwaukee area, said her family has used a small airport in Hartford since she was young.

Compared to commercial airports, she said she prefers to use the smaller ones because they aren’t as crowded and she has created relationships with the workers there.

“The community is a lot better, it’s a lot more personal,” she said. “You get to know the people at a smaller airport. You can walk onto the tarmac and people just know who you are.”

In her experience, Overstreet said these airports also offer more community-oriented events like fly-ins, where passengers can receive a meal when they land, and Eagle flights, which allow children to get up in the air and learn a little bit about flying.

As for the grant, Overstreet said she thinks it’s a good opportunity for the airport to make its presence more well-known in the area.

“I hope that people in the community will really pour into this airport and kind of reap the benefits of having it here,” she said.