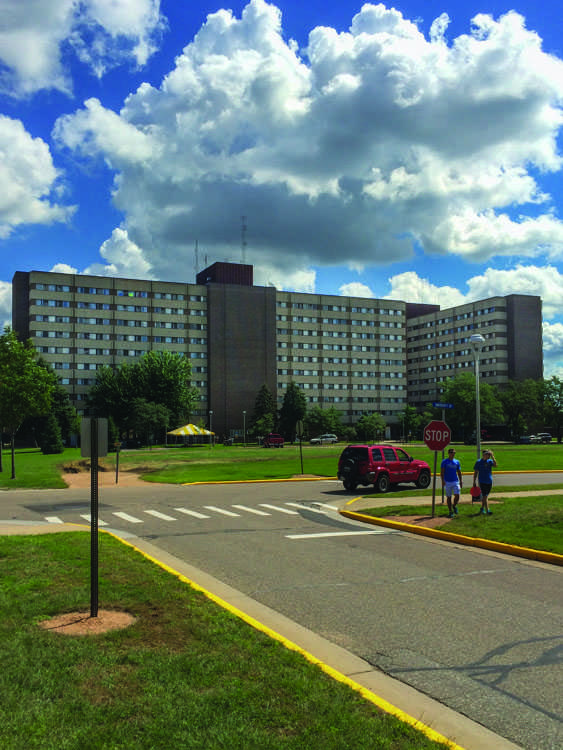 Towers Hall tied for first place in the Recycling Contest, held in the residence halls earlier in March.

The proposed renovation of Towers Hall, estimated at around $32 million, will go before the state legislature next year to ask for a loan for funding.

Chuck Major, director of housing and residence life, said it has a good chance at success because the money for the renovation shouldn’t compete with other major projects asking for funding from the state.

The school would pay back this type of funding over a period of years.

“This is quite similar to what was done with the Towers-type buildings in the last three years in Madison,” Major said. “They have been going through a rejuvenation and remodeling project quite extensively there.”

As it is now, the building would lose some rooms for students to accommodate the increased common areas.

The plans take into consideration student comfort and livability as well as the efficiency of the building.

The tentative plans include air conditioning for both buildings as well as room thermostats that students would be able to adjust to a limited extent.

New, more insulated windows combined with a more responsive heating system would prevent some of the problems the Towers have had with heating, Major said.

Abigail Cafferty, a sophomore who works at the Towers’ front desk and lives in the building, said the heating improvements would be the most significant.

“With the heat on all year, my roommate and I had our window open all year too, even in the winter,” Cafferty said. “It even froze open.”

Pending the approval of the state legislature, the school would open the project for bids for an architect to come make the official building plans.

The largest hurdle for the renovation plans is what will happen to the students meant to be in Towers Hall while the work is underway.

If the current timeline goes as predicted, the plans would be in front of the legislature next spring or summer, and the renovation would start in fall of 2016.

One side of the hall would close down for the year for construction, and the next year it would re-open while the other side closes.

With the school at more than 100 percent capacity already, the loss of over 500 rooms would make the shortage even more apparent to students.

There currently is not a concrete plan for dealing with the closure, Major said.

The master plan for the university had included the construction of another dorm on upper campus, which would have been underway already and would have been able to alleviate some of the need for housing during renovations.

Even with those problems left to solve, the renovation will prove in the long run to be a money saving option, Major said.

The dorm previously scheduled for construction, which would have held around 300 students, was also projected to cost nearly $35 million.

“To build a new Towers Hall, as we have here for 1200 students, would be well over $100 million,” Major said. “So investing $35 million, for the rejuvenation of what we already have here, it’s gonna  extend the life expectancy of this building for quite a bit, for a much more reasonable rate.”

The most recent hall built at UW-Eau Claire was Chancellors Hall, in 2000. The university built Towers Hall in 1966.