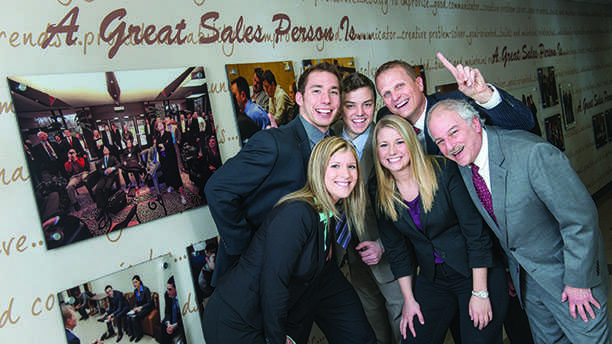 UW-Eau Claire College of Business students, who qualified to compete in the National Collegiate Sales Competition, posed for pictures on Friday, February 7, 2014 in Schnieder Hall.

Faculty coach Jerry Kollross said 28 sales students compete in a competition where they sell a payroll system. These sales pitches are then judged by the competition’s sponsors.

“We had seven people in each of the four role-playing rooms, and the top individuals from each room were brought together as a final four,” Kollross said. “They then went to the finals, and we picked the top two who would represent us at nationals.”

Seniors Jacob Hagglund and Steve Helgeson were not selected to compete, but were chosen as alternates and assistant coaches.

After the four-student team was formed, Kollross said they had a team meeting, critiqued their final role plays and set a list of 10 team goals.

Keiser who took home individual championship honors at the Florida State University International Collegiate Sales Competition this past November leaving the team with a bit of championship experience.

Kollross said Keiser’s experience at Florida State is going to help immensely because the structure of the competition there is the same as nationals, where she had to win her room in each round to make it to the final four.

Pischer, the team’s other competitor, said she looks up to Keiser as a sales mentor and she hopes one of them can end up in the final role play.

“Kelsey has a real great confidence about her,” Pischer said. “She knows the selling process, and she’s great at it.”

Although Pischer doesn’t have the same level of experience as Keiser, Kollross said Pischer is capable of performing well at nationals.

“At our home competition, (Pischer) finished sixth out of 60 competitors,” Kollross said. “That will tell (Pischer) that she can compete with these schools because all the schools that were at our competition will be at nationals.”

The two alternates will also serve as assistant coaches, and Kollross said the team heavily relies on its alternates to prepare the cases Pischer and Keiser will see in the second, third and fourth rounds of the tournament- style competition.

Kollross said there is a lot of pressure on the alternates to review the cases, understand them and then teach them to Pischer and Keiser in the later rounds, because he is focused on getting the two competitors out of round one.

“In other words, going from 128 people to 64, because if you don’t get into round, two you don’t have a chance,” Kollross said.

Helgeson said he is embracing the role of being an alternate, and he knows his job is to help prepare his teammates.

“I am really excited about the opportunity to help the girls advance through the competition,” Helgeson said. “It is quite a bit of responsibility, and we need to make sure they are ready for anything that could happen during the role play.”

Kollross said he tells his students they must out-prepare  their competition to squash nervousness.

“That is our secret recipe, if you will,” Kollross said. “No one will out prepare us.”