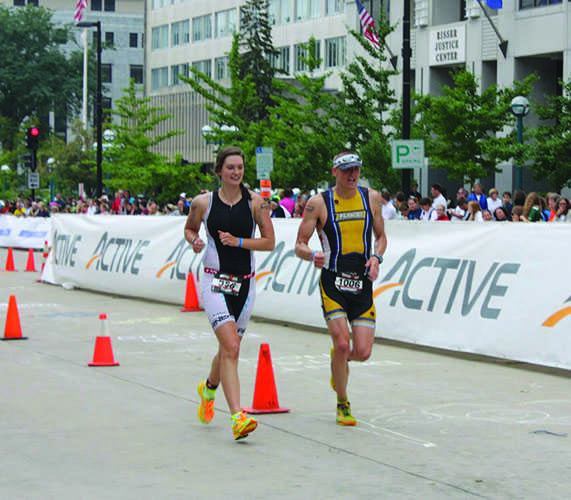 It’s been called one of the most challenging athletic events in the world, with a 2.4 mile swim, a 112 mile bike ride and a 26.2 mile marathon run.

Jagielo’s time, 10 hours and 22 minutes, was good enough to qualify him for the Ironman World Championship in Kona, Hawaii.

“It’s pretty cool, I didn’t know if I would qualify because it was my first Ironman,” said Jagielo, a kinesiology major. “You kind of use your first race to find out what and what not to do, but it went well and I got second in my age group.”

Jagielo said the Ironman World Championship is like the Super Bowl of triathlons.  Petersen, Jagielo’s fiancé, plans to stay in Hawaii with him and cheer him on during the race in October 2014.

Petersen, a mathematics education major, finished with a time of 12 hours and 52 minutes. She was happy to finish the race, even though it was a struggle in certain spots.

“When I had transitioned between the bike and the run, I sat down to take off my biking shoes and as soon as I stood up, my arch started cramping and I was like, ‘I don’t know if I’ll be able to run,’” Petersen said. “I thought about all the students at the school I student teach at and they knew I was participating, so that kind of pushed me to keep going.”

Something else that helped motivate Petersen and Jagielo during the grueling 140.6 mile race was having each other there to calm the nerves. They even bumped into each other during the running portion of the race.

“I was just coming off the bike, worried I wouldn’t be able to run because my feet were cramping and I see Anthony finishing his first loop around the course,” Petersen said. “It was so cool. We got to run side by side for a few minutes past our families, so they got a picture of us together.”

Jagielo said it was nice to have Petersen there during training as well, a strict schedule they started a year before the race.

“When we were waking up at 5 or 6 every morning to go work out while we were training, it was nice to have someone else kind of feel the pain with you,” he said.

Their training included a summer in Colorado, where Jagielo had an internship with Carmichael Training Systems, a personal coaching service. The couple biked the hilly terrain there, and said it helped make the Madison hills look a lot less intimidating.

Jagielo’s mother Julie was in Madison when Petersen and Jagielo finished the race, and said she and Jagielo’s father couldn’t have been more proud.

“They both did excellent,” Julie Jagielo said. “It meant a lot to Anthony that this was something he and Deana accomplished together.”

Something else the couple wants to accomplish together is their upcoming wedding, which will be triathlon-themed.

“Since a triathlon has three parts, our ceremony, reception, and dance will act as the three events,” Jagielo said. “We want to have a big timing clock, and people who stick around until the very end will have completed the race.”

Both Jagielo and Petersen have future plans to race in sprints and half-marathons, but they’re most looking forward to Jagielo’s chance of winning the Ironman World Championship.