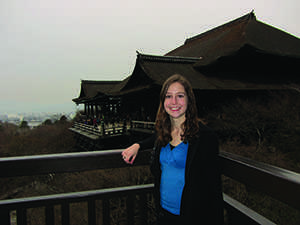 Junior Alicia Hooker stands in front of the Kiyomizu-dera Temple in Kyoto, Japan. She was afforded the chance to study there after receiving two scholarships.

Cherry blossoms, friends from around the world and a kimono.

For Japanese minor Alicia Hooker, studying abroad has always been a sure thing. The less obvious part was where to go.

Her interest in Asian culture and desire to go somewhere completely different than the United States led her to Japan for the semester, where she is studying at Kansai Gaidai University in Hirakata City.

Aside from the desire to learn from a new culture, something more tangible made Hooker’s dream a reality. Hooker is the recipient of two major study abroad scholarships that are enabling her to spend this semester is Japan: the $2,500 Freeman Asia Award in addition to a $5,000 Gilman Scholarship.

“I started working on (applying  for the scholarships) back in August. I worked on them for about a month; they were really big applications,” Hooker said. “I put a lot of work into it and I’m just very thankful that I received both of them. I wasn’t really expecting that but it has really helped me out a lot financially because it can be very expensive to study abroad.”

Study abroad coordinator Colleen Marchwick said the Gilman Scholarship, which offers financial awards to undergraduate students studying internationally, is won by Eau Claire students on a regular basis. In fact, this occurs almost every semester. However, in her nearly 10 years on campus, Marchwick has only seen one student other than Hooker receive both of these major scholarships simultaneously.

“I think it is rare and it is unique and it’s something she should be proud of,” Marchwick said.

Both the Gilman Scholarship and Freeman look for students with under-represented majors studying in non-traditional destinations. Hooker, a software engineering major, meets both these requirements. The Freeman Asia Scholarship is received less frequently by Eau Claire students due to its specific geographic requirements as well as funding issues.

“We have less students going to Asia and the Freeman Asia funding goes away and sometimes comes back: the funding is back and it is going away again,” Marchwick said. “This is the last term that a student can be funded (and) there is no more for the Fall 2013. She was really lucky that she kind of fell in that window of being eligible for both and that there was funding for both.”

Senior international business major Kevin Rezabek also chose a non-traditional destination when he studied in Japan in the spring of 2011. Rezabek chose Japan for many of the same reasons Hooker did.

“I chose to study abroad in Japan because I was looking to go to a place that was a lot different from the U.S.,” Rezabek said. “I had an amazing experience.”

Marchwick said the Center for International Education wants all students who are interested to have the opportunity to study abroad, which is why they strive to make scholarships available.

“Sometimes cost is a barrier to students who have high financial need, so I think scholarships make it possible,” Marchwick said. “We try to make financial resources available the best we can because as an institution we support it.”

Both Marchwick and Hooker have first-hand seen the incomparable opportunities that studying abroad can bring and said it is a “must” for Eau Claire students.

“This has been an amazing experience. I think everyone should go out somewhere else and experience something different; it really opens your eyes up to the world,” Hooker said.

Hooker also encourages people to venture to their “dream country” that they’ve always wanted to go to, even if it’s expensive or seems unrealistic.

“There are those scholarships available for people who need it, Hooker said. “It’s really awesome when you actually get some place that you’ve always wanted to go.”

In her trek around the world Hooker has discovered the world isn’t as big as it seems and people are basically the same in the U.S., in Japan and everywhere.

While she thought she knew what to expect from her adventure, she said all those expectations have been far exceeded.

“Japan is better than I expected. I thought I knew a lot about Japan before coming here but I got here and had extreme culture shock,” Hooker said. “I remember the ride from the airport to the dorm I’m living in now. I’m just looking out the window, my eyes are just big, I feel like I’m a little kid again; everything is new in the world. I felt like I was in a dream. It was the craziest sensation.”