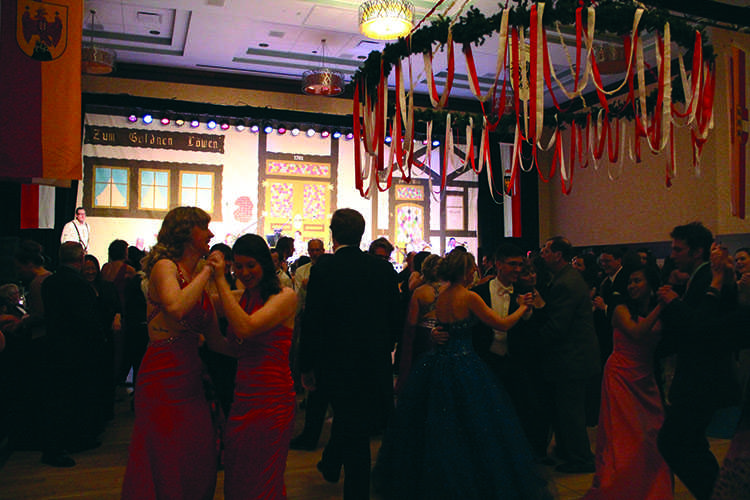 Students and faculty enjoy the festivities of the Viennese Ball Friday and Saturday night at W.R. Davies Center

As the Davies Center closed down to students last Friday, Karen Stuber began the final touches on her biggest project of the year. Stuber, the Executive Director of the Viennese Ball, and a committee of thirty other staff members and community members have the task of turning the student center into Vienna, a city of dreams.

The largest event on UW-Eau Claire’s campus is a two-day event including student performers, community members and people from all over the country who visit just to witness the spectacle.

Stuber said she was especially worried about this year’s ball. With expectations being at an all time high she knew the difficulty of the task in front of her and her team.

“It was like starting all over and I didn’t know what people were going to expect,” Stuber said.

Stuber also said that this event is unique and special to the history of Eau Claire. She has been a part of V-Ball’s coordination since day one. She helped the founders Ada Bors and her husband Adam, former staff members at Eau Claire, make their dream a reality.

Stuber said the Bors traveled to Vienna and fell in love with the city and its culture. In hopes to recreate that magic, Ada Bors went to the chancellor and requested a Viennese Ball be formed at Eau Claire. Much to the surprise and little support of others, the chancellor agreed.

Stuber said with few expectations and little funding, V-Ball became a success right from the beginning.

“We were expecting about 200 people,” Stuber said. “So we planned for it, the food, drinks everything. We had 600 people show up that first year.”

Now that V-Ball is the new student center that covers three floors and occurs on a Friday and Saturday night, Stuber decided to add more tickets for the event.

The world’s second largest Viennese Ball, the largest being in Vienna, grew Saturday night, selling out at over 1,750 guests and with student performers, staff workers and honored guests the total count was over 2,300 guests. Friday did not quite sell out with 150 guests fewer than Saturday night.

One of those honored guests was sophomore Reana Mitchell who received the Wilhelm and Ingrid Brauner Award, a scholarship awarded to an individual studying at the Karl–Franzens–Universität–Graz in Austria.

Mitchell said that the award was an honor and a surprise but she was also surprised about the event in general.

“I was not expecting it to be so fancy,” Mitchell said. “I thought it was really cool how lots of people came from the community and it wasn’t just UW-Eau Claire students.”

Also receiving a scholarship was Derek Bruns, a junior music student. Bruns received the Senior Music award with five other music students. Bruns did not realize he was even considered for the award until he received an email about it.

“I felt super honored that some professor, I’m not sure who, recommended me for it,” Bruns said.

With the awards being a big part of the committee’s job, Stuber said the important part of her job is creating a great atmosphere for the visitors at the ball.

“Overall, it’s a fun event to work on,” Stuber said. “You work so hard and get to see everyone have such a wonderful time. It’s a dream come true.”

With the event coming into its 40th year, Stuber and the Viennese Ball Committee are looking for new and innovative ways to make impacts, culturally, historically and musically to campus.