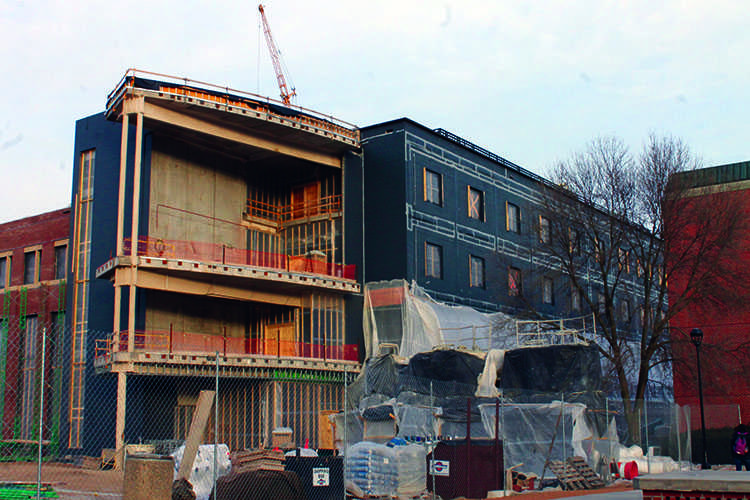 The education building that is currently under construction on UW-Eau Claire’s campus should be completed by November of this year and is set to be operational come the spring semester of 2014.

The building still does not have an official name and is being temporarily called the Education Building. It will house not only education faculty and staff, but different departments as well.

Education Building Committee Chair Gail Scukanec said the new education building will have diverse departments and many different classes will be held in the building.

Along with academia, the building will also be home to places such as the Multicultural Affairs Office, Math Lab, as well as the Dean’s Office. There will be 22 classrooms in the new academic building, with most being medium to large rooms.

She also said she expects economics, psychology and biology classes may be held in the building, as these classes usually need larger-scale rooms for entry-level courses.

Freshman education major Jordon Stevens said she is looking forward to a new primary building for education, but said he doesn’t see the need for a building strictly for the major.

“I would imagine that this building will be better than the one we have now (Brewer Hall),” Stevens said. “But I don’t know if education majors need a whole building just for themselves at this point.”

With the W.R. Davies Center being environmentally friendly, with solar panels and sustainability features designed to use 30 percent less energy than current codes require, Stevens said he hopes the new building follows suit.

Construction Project Coordinator Chris Hessel said the building will not have certain sustainability features that Davies had because of certain guidelines that are implemented by the state.

“Because of the location of the building, there will be no solar ray panel, no green roof,” Hessel said. “The state has guidelines about how much glass you can have on a building and that is really what it comes down to.”

The new building instead will have a dashboard of energy efficiency that can be put into a number to express how much the building is saving according to current codes on building efficiency.

Campus facilities planner Ricardo Gonzales said this will be an important feature of the new building.

Those constructing the building have taken a low-tech approach instead of a high-tech one, a choice which Gonzales said is meant to save the university money.

“You can make a technological marvel,” Gonzales said. “But it requires so much more money to maintain those parts and to train people.”