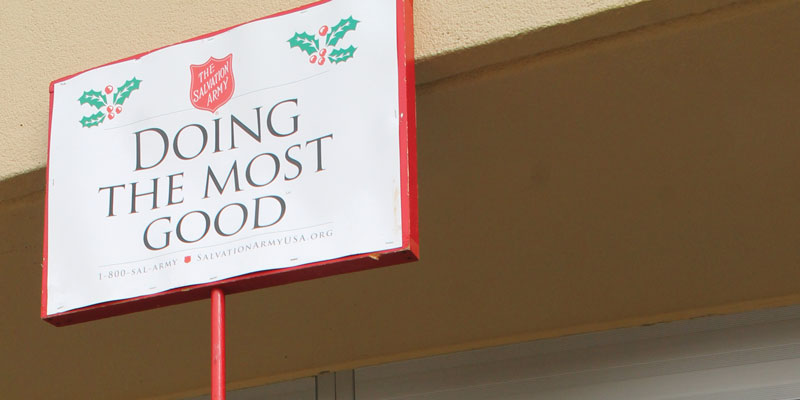 Now that Thanksgiving is over and the cold weather is here to stay, the employees and volunteers at the local Salvation Army are already in the midst of their Red Kettle Campaign, a bell ringing fundraiser run throughout the Chippewa Valley.

Alyssa Dawson, Eau Claire Salvation Army Christmas coordinator, said all the donations from the fundraiser will go towards the organization’s 2013 budget. Amongst other things, she said the money will be used to help with people’s rent, energy and gas bills, bus tokens and hygiene assistance.

“I think it’s a great program that the Salvation Army does because so much of the money that we raise comes right back to our community,” Dawson said. “Whether it’s a penny or a $20 bill, that money is supporting somebody.”

She said the Chippewa Valley organizations raised approximately $139,000 last year from ringing bells alone. But she said they received just under $250,000 from their ten different locations as a whole for their entire Christmas Campaign.

But of all the fundraisers done during the holiday season, none are located on campus. Dawson said the Salvation Army has spoken with UW-Eau Claire about the possibility in the past, but she is not sure why they haven’t proceeded.

Karen Frederick, Eau Claire Salvation Army director, said she doesn’t know either. She said the discussions with the university were before her time as director, but she said the separation could be due to the organization’s association with religion.

She said since the school doesn’t affiliate with any faith, they may not want to work with an organization that does.

“I know for a while we couldn’t even use service learning students because the stipulations were pretty strict as to what we could have them do,” Frederick said.

But Frederick said she wouldn’t be opposed to putting a kettle or two on campus. She said she is going to contact her superior and try to find out exactly why there has not been an affiliation with the campus in previous years. While the Salvation Army isn’t directly tied to the university, the organization is still pretty involved with the school’s students.

“I know in the past the university, with certain groups, has requested a counter kettle for so many days or a week for whatever event they are planning,” Frederick said.

Several students have signed up and volunteered for various activities — including bell ringing — in the past, Frederick said. One volunteer, junior Jace Kramer, plans on doing just that this year. Kramer said while he is volunteering to fulfill service learning hours, he is also doing it for a different reason.

“Since coming to Eau Claire, I don’t get the same Christmas mood that I used to because I’m so busy with homework and what not,” Kramer said. “So, hopefully this will be a good opportunity to meet and greet people and get more of a Christmas mood than I’m used to.”