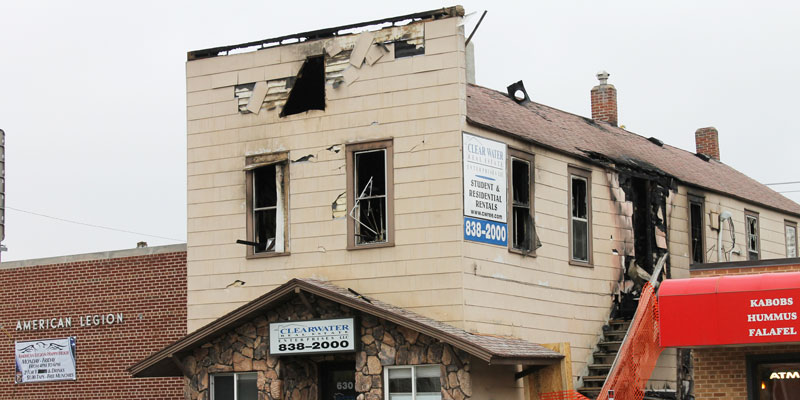 An apartment fire on the 600 block of Water Street claimed the lives of two people Monday, one a current student and one who had taken the semester off from school.

Sophomore computer science major Ross Livermore, 21, who was not currently enrolled at Eau Claire, died Monday of injuries sustained in the fire.

The next day, senior physics major Jacob Clarkson, 22, died at the Hennepin County Medical Center in Minneapolis. The cause of his death was not released.  He was admitted with serious burns.

Garret Isakson, 21, a junior management major, and Casey Malan, 21, a senior English major, were treated at the Mayo Clinic in Eau Claire and released Monday.

Senior Emily Gresbrink was friends with Livermore and knew Clarkson as well.

On the day of the fire, she initially saw the news from the email that was sent out by Interim Chancellor Gilles Bousquet informing the student body of
the incident.

Immediately after reading the email, she looked at local news and found out the location of the fire.

That is when it initially hit her.

“It was like, ‘Oh crap. I know everyone in that house. That means I literally know someone who is dead right now,’” Gresbrink said.

As she talked with others who were close with everyone who lived in the apartment, they decided to put together a drive to help out the two surviving students.

“While we were giving Ross and Jacob and their girlfriends and their families space, we felt like this was something we could do to keep ourselves busy from thinking about it and it’s nice to do something for that,”
Gresbrink said.

Gresbrink collaborated with Briana Burke, the student services director for Student Senate, to create the drive for Isakson and Malan.

“This kind of thing is what I see my commission doing in the future, so I really wanted to establish something like this for the future,” Burke said. “This is an unfortunate way, but it is a good way to get the message across that this is what being a student at Eau Claire should be — band together when times get tough.”

Gresbrink and Burke are looking for school supplies, graphing calculators, books, folders, pens and anything that could be used by a student in a dorm or apartment, including shirts and sweatshirts that are medium- or large-sized. They would also like non-perishable food items.

On Wednesday, a table was set up in the Davies Center adjacent to the service center. They have already received a variety of items, Gresbrink said.

“It’s cool to see what’s going on at that table whether it’s a package of Ramen noodles to the TV that is in the back of my car,” Gresbrink said. “These people don’t know Ross and Jacob and Casey and Garret, but they are still giving them stuff out of the goodness of their heart.”

The table will be in Davies Center from 10 a.m. to 2 p.m. Thursday and Friday. They are accepting monetary donations, but those donations must go to the service center.

Editor’s Note: Emily Gresbrink is a former employee of The Spectator.