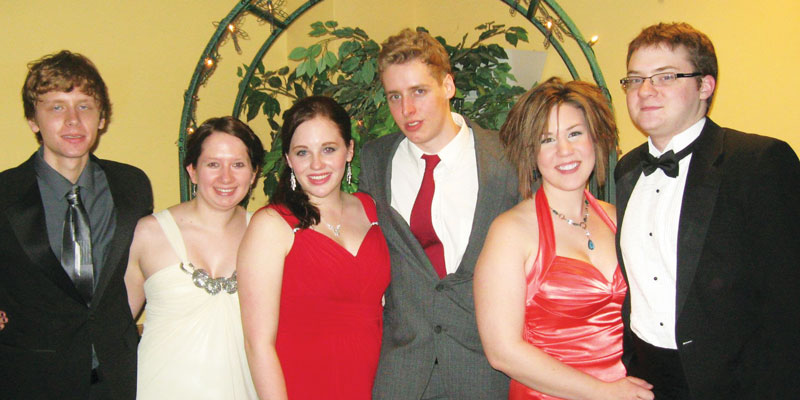 Just two weeks before they died in a fire at their Water Street apartment, Jacob Clarkson and Ross Livermore, friends since the second grade, talked about having their ashes shot into space.

“I don’t remember exactly how it got started but, all of the sudden they started talking about what they wanted done with their bodies when they died … They just talked about how they wanted to be shot up into space and float around…” said Livermore’s girlfriend, Ally Thieme.

While shooting one’s ashes into space is rather expensive, people close to the two thought something like it would be a fitting tribute. So during Clarkson and Livermore’s respective funerals last weekend, family and friends came together to build a spaceship out of Legos, the building toys which both enjoyed.

Anna Field, Clarkson’s girlfriend, said there has been talk of donating the object to UW-Eau Claire’s Phillips Science Hall as a dedication for the former Eau Claire students.

On Oct. 8, police and firefighters responded to a fire that broke out on the 600 block of Water Street. All four occupants of the apartment were there when the fire started. Two of the roommates, Garret Isakson and Casey Malan, were able to get out of the apartment with limited injuries. Isakson was unable to be reached for the story while Malan declined to comment.

Clarkson and Livermore, both from Stillwater, Minn.,  did not get out in time and were found unconscious in the apartment. Later that day, Livermore was pronounced dead. Clarkson was immediately moved to the Hennepin County Medical Center in Minneapolis, where he died the next day.

Clarkson, 22, was a senior physics major, and his mother Tina said the subject was more than just another class for him.

“He had an astronomy teacher and he liked that area in high school. Then when he went to college he just took physics courses and just got more and more involved with it and it just became a passion of his,” Tina Clarkson said. “He seriously thought physics was everything.”

Field said that close friends and family would describe him as a reserved, funny guy. She said that Clarkson was rather quiet but once people got to know him, they began to see his sense of humor.

Tina Clarkson also said that her son was very comfortable at home. She said it was a place for him to hang out, have no expectations, and spend time with his family.

“He was totally doted over by his three sisters. At a young age, they would be carrying him around because he was so darn cute,” Tina Clarkson said. “He was pretty much the center of the family.”

Livermore, 21, was currently taking a semester off from school. He was a sophomore computer science major.

Thieme said that Livermore was heavily involved with music. He was originally a music major before switching to computer science. He was also involved in the Blugold Marching Band and the trombone choirs at the university.

“He wasn’t extremely serious unless it came to music. We would just sit around and listen to music … His favorite composer was (Ludwig Wilhelm) Maurer,” Thieme said.

Bruce Livermore, Ross Livermore’s father, said his son was very involved with computers from an early age. He said that during his son’s adolescence they would build computers together. He also said that when it came to fixing gadgets at his apartment in Eau Claire, Ross’ friends knew he was the go-to guy.

A cause for the fire has yet to be determined. Scott Burkhart, deputy chief of the Eau Claire Fire Department, said the investigation will most likely be stalled until the beginning of November.

“Information and evidence that is collected at a fire scene has to be available to all parties involved,” Burkhart said. “We don’t want to go in there and disturb the evidence without giving them the opportunity to investigate also. In the meantime to give them a good time to respond, we are kind of holding off our investigation …”

As a result, they are currently leasing a space at 220 Water St.

They plan on rebuilding at their original site but are uncertain about when that process can begin. McHugh said that due to the damages sustained to the office, the entire building may be a total loss.

McHugh said Clarkson, Livermore, and Malan had rented from him since June 2011 and McHugh had gotten to know them fairly well. He expressed his sympathy for Clarkson’s and Livermore’s families.

“Since these guys lived directly above our office, we got to see and speak with them more frequently and all four of them were great tenants and great guys,” McHugh said. “Jacob and Ross will be sadly missed by us … Our hearts really pour out to these families who have experienced the loss of their sons.”