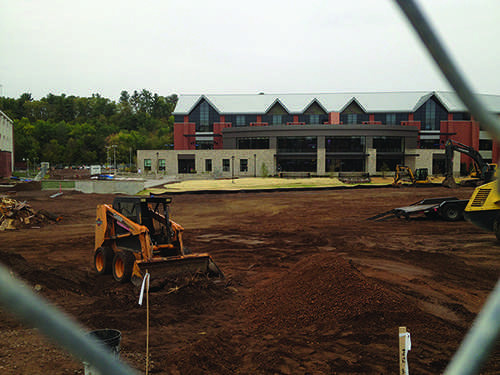 The UW-Eau Claire campus mall, a popular destination for students and important recruiting ground for organizations in the past, has been transformed into a large pile of dirt and a maze of
chain-link fence.
Director of Facilities Management Terry Classen, the current inconvenience the construction has created will all be worth it in
the end.
“This will be a mall to die for,” Classen said. “It’s going to be a mall that will be the envy of
the state.”
Construction on the mall began in earnest just days after last spring’s commencement ceremonies and is expected to continue through next November with the completion of the new education building. Classen said he is hopeful much of the construction will be done in the next few months.
Classen said the new mall will be much larger and will include an amphitheater, located where the old W.R. Davies
Center was, to hold
performances. Classen also said a renovation plan for Garfield Avenue set to be completed in the summer of 2014 will expand the mall and make it
pedestrians-only.
But during this transition process, events held on the mall in the past have been moved to other venues. The first Blugold Organizational Bash, usually held on the mall, was instead held in the
Ojibwe Room and Dakota
Ballroom in Davies.
“It’s hard to get foot traffic on the third floor of a building,” said Frank Heaton, director of the organizations commission. Heaton said he still expected a good turnout
for BOB.
As of Tuesday, 150 campus organizations, approved by the Organizations Commission, had signed up for spots at BOB.
Because of the indoor venue, there were only 157 spots available.
Classen said a temporary plan is being discussed by the Chancellor’s staff to accommodate organizations who have relied on a large mall presence in past semesters. Areas
under consideration for use for organizations include the grass behind Putnam and Katherine Thomas Hall and the sidewalk facing Garfield Avenue in front of Zorn Arena.
Rachel O’Neil, co-chair of the University Activities Commission Festivals Committee, said her committee used the mall frequently in the past, especially for Homecoming festivities. But the committee has tried to remain flexible with its promotional plans and locations, including utilizing upper
campus more.
“I think that we’ll still be able to reach the same amount of students, just in a different way,”
she said.
O’Neil also said the Davies Center may be able to foster the level of campus camaraderie that was once found on the campus mall.
Classen said the large scale of construction is due to the multiple projects going on at once. Classen said this approach is actually preferable to doing it piecemeal over years and cited construction of the previous campus mall in 1985 as proof.
“I saw how we went through some pain then, but everybody loved it for decades after that,” Classen said. “This is going to be bigger and better.”
Editor’s note: Managing Editor Taylor Kuether contributed reporting to this article.