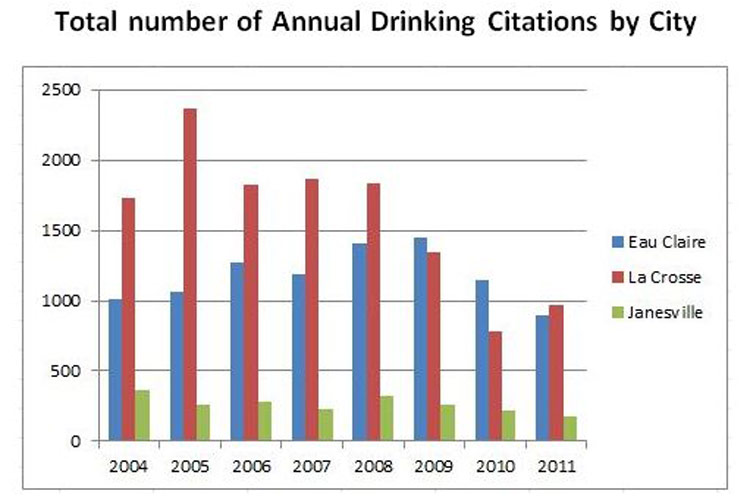 Story by Michael Even

It was the middle of the winter and Derek Boldt and about 15 of his friends were casually drinking, listening to country music and enjoying time conversing with high school friends who hadn’t been together for a while.  Two of Boldt’s friends were celebrating their birthday.  The mood was lighthearted and fun as everyone was happy to see each other again.

Unfortunately for Boldt and his friends, the fun in their night was about to hit a rough patch.  The country music that they had been enjoying was a little too loud.  Several police officers had heard the music and knocked on the door to ask them to turn it down.  When the door was opened the police requested to step inside.

The apartment renter allowed them entry and the officers quickly noticed the alcohol surrounding the group of friends in the living room.  They asked if anyone in the room was underage and those who were cooperated and raised their hands.  Shortly after, they were all lined up to take a preliminary breath test.

Boldt was hopeful he would blow zeroes, as he had only had one beer by the time the police had shown up.  He inhaled deeply and then exhaled into the breathalyzer.  The digital numbers appeared … 0.01.  Boldt was then cited for underage drinking.

The ticket didn’t have the desired effect, though, Boldt said.

“It didn’t deter me or any one else really from drinking again,” he said. “It just made us more cautious of what we were doing and the environment we were in.”

Boldt is not alone in his situation.  According to data gathered from the Eau Claire Police Department, the number of annual underage drinking citations over the past eight years has averaged over 1,100 citations each year.

Based on the 2010 census data, the number of 16- to 20-year-olds (the age group most likely to be cited for underage drinking) living in Eau Claire is more than 7,900 people, while La Crosse’s population in the same age-range is roughly 7,500 people.  Despite a fewer people in the range where underage drinking is most likely to occur, La Crosse has had an average of about 1,500 drinking tickets each year for the past eight years.

From 2009-2010, UW-Eau Claire has had a higher number of underage drinking citations annually than La Crosse.  In the five years prior to that stretch, La Crosse Police had cited significantly more underage drinkers every year.

Captain Jason Melby of the La Crosse Police Department noted that one of the larger factors contributing to the reduction in La Crosse’s citations is the fact that the mayor has ordered a hiring freeze since 2009 due to a decrease in funding.

“You don’t have the manpower to enforce it as strictly,” Melby said.

Melby explained that prior to the hiring freeze two officers who had discovered a party with underage drinkers could call the station and have six more officers come to write citations for the party.  This currently isn’t possible because the LCPD needs those officers for other areas of police work.  As a result, fewer underage drinkers are cited.

The Eau Claire Police Department, however, has seen more consistent numbers over the past eight years in its citing of underage drinkers.  Eau Claire’s largest change in underage drinking citations occurred from 2010 to 2011, where there was a 22.4 percent decrease in citations.

Eau Claire Police Officer Jason Kaveney said there are any number of factors that can account for the fluctuation in citations.

The Eau Claire Police Department did receive the Comprehensive Alcohol Risk Reduction grant in mid-2009, which could have had an impact on the increased citations that year.  The $10,000 grant funds party patrols as well as compliance checks at bars and liquor stores in an effort to control underage drinking.

Kaveney suggested that factors such as weather could even play into the changes in the total number of underage drinking citations.

One thing that hasn’t changed is the Eau Claire Police Department’s stance on underage drinking.

Some people, however, disagree with the drinking age that is currently in place. Boldt, an education major at Eau Claire who has turned 21 since being interviewed for this story, is one of those who feel that the current legal drinking age is unfair.

Boldt says that he does understand the dangers involved with drinking.  He explained a story of a dangerous experience some of his friends were involved in the same night he was cited.

“That night there were a couple kids who were 21,” Boldt said. “They went out to the bars afterward and they brought back a kid who had passed out in a snow bank.  If those people wouldn’t have found him, he definitely would have died that night in the snow bank.”

Klaira Lerma is another Eau Claire student who has been cited for underage drinking.  Lerma, however, feels that the drinking age should not be changed.

“Everyone thinks you should lower the drinking age to 18, but I think it should stay at 21 because the brain isn’t fully developed until you’re 21,” Lerma said.

Lerma also has no hard feelings toward the police.

Lerma especially emphasized the importance of being safe when drinking underage.

“There’s always a risk of alcohol poisoning, being drugged, sexual assault, falling and just getting hurt,” Lerma said.  “There’s a lot of risks involved with alcohol consumption. Drink with people your comfortable with and you’re safe with.”