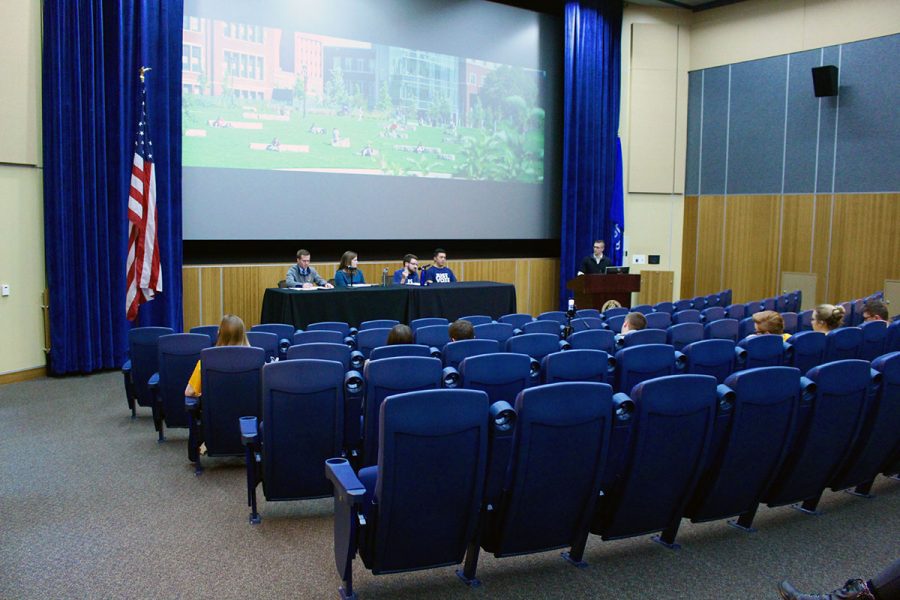 About 50 students, most of whom are part of Student Senate or are running for a position on Senate, were in attendance of the debate last Wednesday, held in the Woodland Theater.

In the midst of UW-Eau Claire’s Student Senate presidential election, Wednesday’s Presidential Debate highlighted the differences between the candidates.

The hourlong debate sparked several heated discussions, although both tickets appear to be focusing on similar goals and platforms.

Juniors Katy McGarry and Nick Webber are running as an executive ticket with McGarry campaigning for president. Junior Nathan Altmann and sophomore Justin Vue are campaigning as the contested ticket, with Altmann for the presidency.

The candidates talked about issues including student segregated fees, shared governance, housing and the Equity, Diversity and Inclusivity Initiative. About 50 students, most of whom are senators or are campaigning for a position, attended the event.

When it came to student segregated fees, which fund a host of student organizations on campus, Vue said a great concern of his is to educate students on what exactly those fees are.

“We could be spending it in the best possible places,” Vue said, “but if students aren’t aware of what segregated fees are, then that’s a very big issue.”

McGarry said she has gained experience with segregated fees through her involvement in the Finance Commission. She and Webber would like to continue the fiscal responsibility Senate has demonstrated this year in how they cut student segregated fees by 1 dollar.

In response to the possibility that students will be able to opt out of paying student segregated fees, Webber said he and McGarry would keep the opt out from happening through lobbying.

Webber said having a “respectful and clean” relationship with the administration will be the most effective way to represent his fellow students, but didn’t offer any additional insight into how they would prevent the opt out option.

This is where Altmann said they were getting to the “great differences” between the tickets.

In a discussion revolving around the issue of housing, Altmann began by addressing the issues students are facing on and off campus, emphasizing Vue’s experiences as a resident assistant as well as his own experiences off campus.

Webber responded by pointing out Altmann and Vue’s absence from voting for proposed tougher ordinances on landlords at last Monday’s session.

“Katy and I were there to pass this resolution through the Student Senate in support of these proposed housing maintenance changes and the other ticket, both Nathan Altmann and Justin Vue, were not there to vote,” Webber said. “And I think that is unfortunate, I believe that the students deserve better than that.”

Altmann said although he and Vue were unable to vote Monday, they have lobbied for housing legislation in the past.

When the candidates were asked what they deem their most important goal should they be elected, Altmann said he and Vue hope to give students who have been mistreated in the past the opportunity to be heard.

“The truth of the matter today is there is one ticket up here who has taken that matter seriously, one ticket who has authored legislation protecting LGBTQIA+ students, immigrants and undocumented students, students with disabilities,” Altmann said, “and there’s another ticket who has voted against Hmong learning opportunities.”

Altmann was referring to a resolution in support of another resolution that was passed at UW-LaCrosse supporting Hmong learning opportunities that Webber voted down.

Webber denied Altmann’s statement. He said that the idea for their motto “Blugolds Fly Together” was to empower every student.

“We are not here to single out individual marginalized identities, but rather give them the resources that they need and use our experiences and use our leadership to make them go in places that they never thought they could do possibly before on this campus,” Webber said. “We have the experience to do that, we have the want to do that, and we have the passion to do that, so nothing could be further from the truth and I absolutely resent the fact that you said that.”